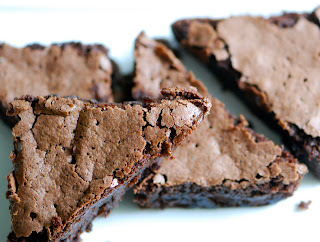 No, I am not into any occult or anything. Titled my post as "Witches' Brownies" because the brownie recipe I am about to share was adapted from a fabulous book, Fat Witch Brownies by Patricia Helding. I had heard of the brownies that come from the lengendary Fat Witch Bakery in New York. I chanced upon the book at the public library and flipping through the colorful and attractive photos, I zoomed into a simple recipe which I thought would produce a high rate of success - Cocoa Brownies.

I decided to bake brownies this time round to break the monotomy of posting my macarons adventure on my blog. In fact, another factor that pushed me to make brownies was my pure guilt of seeing a Nordic Ware Brownie Baking Pan I had purchased sometime ago being stashed away unused in some corner of my pantry. Having attended a class that demonstrated the use of Nordic ware, I was impressed and had wanted to experiment with them. I have tried using aluminium pans with complicated designs for baking before and the fine details do not come out as clean as those from Nordic wares. 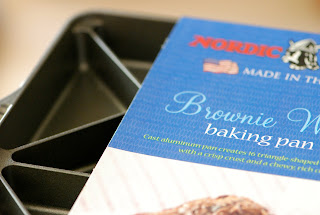 As the brownies came out hot from the oven, I could not resist but to remove gingerly a 'triangular' piece from the pan immediately and popped it into my mouth. 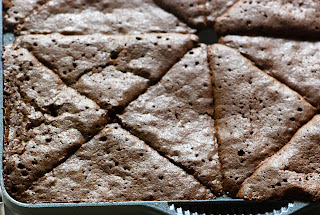 Big mistake. I had not let the brownies cool down at all. Common sense did not prevail then. The eagerness to taste what Fat Witch brownies are all about was too great. It is therefore not fair to give my verdict at that point of time. As patience knocked on my head, I decided to leave those brownies alone. A couple of hours later, I tried them and thought them to be a little dry and not too great. It was only the very next day that when I took a piece as dessert that I discovered I had made very moist and chocolaty brownies!


Cocoa Brownies adapted from Fat Witch Brownies
Ingredients:
180g unsalted butter
1/2 cup cocoa powder
11/2 cup brown sugar
4 eggs
1 tbsp pure vanilla extract, not essence or flavor
3/4 cup plain flour
1/4 tsp sea salt
Preheat oven to 180 degree celsius. Line a baking tin if you are not using Nordic ware. For me, I greased my pan by spraying as little oil as possible.
Heat butter over low heat. Ensure that butter does not boil or worse, turn brown. As soon as I see the butter melting, I remove it from the heat and stir whatever remaining solids to melt them. Allow the melted butter to cool for 5 minutes.
Sift the cocoa powder and mix in the sugar in a separate bowl. Add cocoa-sugar mixture to cooled butter and using a handheld mixer, whisk until blended.
Add eggs one at a time, scraping down mixture that cling to the sides of the bowl after each addition. Beat till batter is smooth.
Add the vanilla extract at this point and give it a quick whisk before adding the sifted flour and salt. I folded in the dry ingredients in 3 batches just to ensure that they are well combined.
Spread batter into tin or pan and bake for 30 to 45 minutes. I suggest you let the brownies cool for more than an hour. Best consumed, in my opinion, the next day. 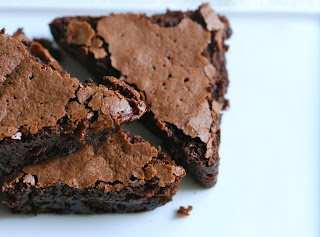 There are so many other recipes to try out ie from brownies to blondies to bars. I might just want to buy the book and with the prevailing low exchange rate purchase it online.
Posted by ken bakes at 9:43 PM