Tis the Season to be Holly...

It has been quite a while since my last post. Not that I haven't been baking. On the contrary, I have been baking at least once a week.  Just that I had the writer's block when I wanted to update my blog. I should have blogged about my most challenging experience, that is, baking close to a hundred Red Velvet Cupcakes for my mum's 80th Birthday in November. Praise the Lord - all's well that ends well.

Anyway, the Christmas mood has suddenly sunk into me. Been working and could not apply leave until now. Going on a vacation with my family to Tokyo - free and easy. But before I go, I had the strong itch to make some chrismassy cakes. Imagine being bombarded by all the food magazines that feature on their covers Christmas bakes and food. Well, since I am planning the dessert menu for the family's annual Christmas Dinner - just like any other year, I thought I should experiment with some cakes and frosting.

Came across this site that shouts "The Ultimate Vanilla Cupcakes". Go check it out yourself - a must at www.cupcakeproject.com. 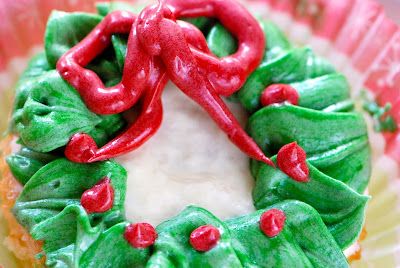 Followed the very simple recipe, every step of it, except adding in the sour cream. Didn't have it in my pantry so I substituted both the sour cream and milk with buttermilk. Not bad actually. It has become my own "The Ultimate Buttermilk Cupcakes"! Besides, if you checked out the recipe, it did not call for the decorations above. 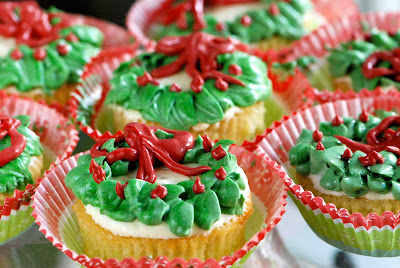 I was inspired to make the Holly Swiss meringue buttercream after leafing through Martha's Stewart's "Cupcakes". Didn't have the confidence at first to make the buttercream. Well, it turned out quite good  as far as I am concerned and I should say I am rather pleased with it. 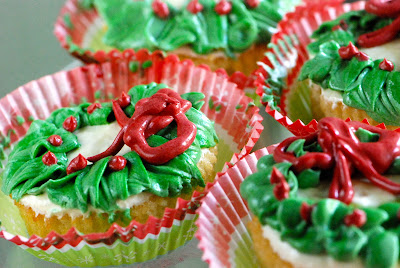 After my trip, I am thinking of baking a Christmas...
Posted by ken bakes at 3:12 PM

Email ThisBlogThis!Share to TwitterShare to FacebookShare to Pinterest
Labels: cupcakes