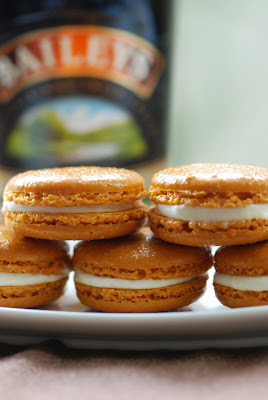 I attended my third Macaron baking class last Saturday morning. I will be attending another one (hopefully my last with all that hundreds of dollars I have been spending per class) at the end of May. Call me crazy, mad, ridiculous and so on. But I simply enjoy baking and especially baking with others who have the same interest. It is like group therapy for me seeing others absorbed in trying their best to perfect, in this case, their macarons. In fact, my wife is the one who encourages me to, "Go and learn. Never stop learning. Who knows you will pick up a tip or two". "If it makes you happy, go on," and she will end up saying, "It's your money anyway". Apart from that, I think I just want to learn new recipes for macaron fillings.
I know I can make references to the book I have by Jill Colonna or the millions of recipes for fillings on the internet but somehow, it is different in a class. You become a student all over again. You get to try out the recipe and see for yourself the outcome as it should be or should not be. You know what I mean?
I want to be honest here. When I did the macaron shells as soon as I got home after the class, I had intended to make Lemon ones with Lemon Curd fillings. Since I had made them in class a couple of hours ago, I thought I should try it out at home. Having had a bad experience with the coloring (as pointed out in my previous blog), I wanted to make sure I had bright and cheery and lemonnish yellow macarons. I used the icing gel labelled Buttercream yellow. Mistake! Again! What turned out were Coppertoned Macarons. Darn! Hey, wait! Got an idea. Creative outburst in the midst of defeat. 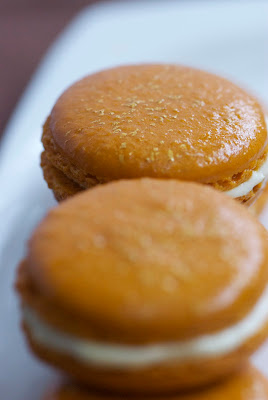 As part of a 'rescue' operation, I dusted the resting shells with gold powder - as you can see in the photo above. Did not bother whipping up the lemon curd anymore but came up with a Baileys cream filling instead. Thought it more suitable here. From Lemon Macarons, I am now presenting Gold Macarons with Baileys Cream fillings. I really cannot remember where I got the recipe from. Must be from the net but did not copy the URL. Give me time to search for the owner of this recipe before I post the amount required each of the ingredients. At this juncture, I suppose I can share the steps I took to make the fillings as they are the universal steps to make cream fillings. On hand, have
-a tub of mascarpone
-whipping cream
-sugar
-Coffee liquer - which I obviously used Bailey but I am sure Kahlua or Tia Maria will do just as great
On a stand mixer, I whipped up the mascarpone till light. Added sugar and beat again. Poured in 1/2 cup of Baileys (always like a strong taste) and whipped it up again. Found it too liquid. Perhaps I should have added in more mascarpone.
In a separate bowl, I whisked the cream till stiff. Folded the Baileys mixture into the whipped cream. Piped them out immediately on my waiting shells. 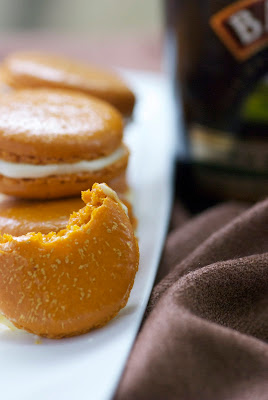 They say that after piping the fillings, keep the macarons refrigerated and allow the fillings to infuse into the shells. Point noted but not taken. I immediately popped one into my mouth. Delicious.  I took another and decided to bite off a little and let the remaining portion pose for a photo shoot.
As I arranged the macarons and positioned the Baileys bottle outdoors, the mid afternoon humidity began to bother me and my poor macarons began to become more shiny and soft by the minute. Not sure if this happens to other macaron makers as well. Anyway, I must say I was quite pleased with how my Lemon, I mean, my Gold Macarons with Baileys Cream fillings turned out... 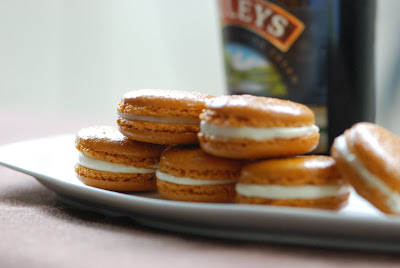