Cheers to a Cherry Cake 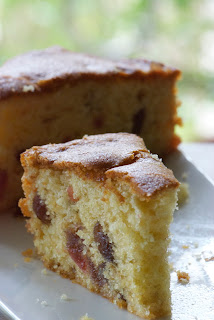 As a follow up to my previous post, I decided to bake the Cherry Cake adapted from robin's eurasian recipes. I had to tweak the recipe as I was baking half the recipe. But the tricky part was how does one half a recipe that uses 5 eggs? Came round that when I calculated the total weight of 5 eggs @60g each and divided it by two. Not too sure if that was a wise move but I simply did it.
I replaced the maraschinto cherries with what was available in my fridge ie Waitrose Glace Cherries. You will notice that for the cherries, half of 250g is 125g but as I wanted a little more cherries to be in the mixture, I added to 160g glace cherries instead.
The ingredients below are for a half recipe. Oh yes, I omitted the cherry essence as I did not have it and put in vanilla extract instead. On hindsight, I should not have added any. Why? Did not think the vanilla brought out the flavor as much as the cherry essence would have. So if you do not have the cherry essence, I suggest do not waste your vanilla.
Cherry Cake adapted from robin's eurasian recipes:

Ingredients
150g plain flour
1 tsp baking powder
1/8 tsp salt
125g unsalted butter (not stated in the actual recipe if salted or unsalted)
150g castor sugar (original recipe used fine sugar)
150g eggs (original recipe is 5 eggs so this is really up to you how you want to halve it)
1 tbsp milk (I used full cream)
1/2 tsp cherry essence ( I omitted it and replaced it with 1/2 tsp vanilla extract)
160g diced glace cherries (original calls for 250g maraschinto cherries)
Procedures
1) Preheat oven to 170 degrees Celsius.
2) Sift flour, baking powder and salt in a bowl and mix well.
3) On a stand mixer, beat in butter and sugar till creamy ie 5 mins on high speed.
4) Add the eggs one at a time while beating for a few more minutes.
*5) Fold in half the flour mixture followed by the milk and vanilla extract and mix well.
*6) Fold in the remaining flour followed by the cherries.
7) Pour mixture into an 8 inch tin and bake for 60 minutes.


*Steps 5 and 6 were what I did instead of what the recipe called for - Fold in the flour mixture and add milk, essence and cherries. 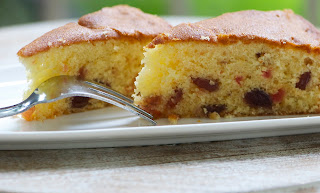 As soon as the cake was cooled, I cut it up to serve as dessert for my son and me. Too sweet for me! That is the problem when you add 35g more cherries into the batter. Well, at least I had the thumbs up from him.
Posted by ken bakes at 12:42 PM