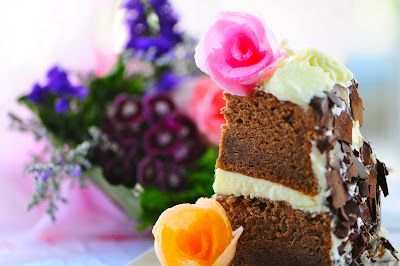 A retrolicious cake - that was what I called it as I baked this wonderfully moist and light sponge cake on Valentine's Day. To be more precise, I named it, "Old Flame". It is a chocolate sponge cake, with a dash of Cointreau, topped with rich vanilla buttercream and wafer roses. The sides are covered with bittersweet chocolate flakes. 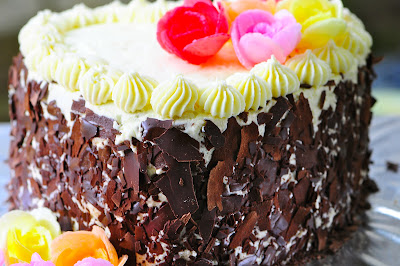 For those who live in this sunny island, these wafer roses used to be common sight and popular toppers for light sponge cakes sold at bakeries.

My sons and their friends who happened to be in the house on the day I creamed the cake were fascinated with those roses. They tasted the wafers after much persuasion and politely turned down when I offered them more. 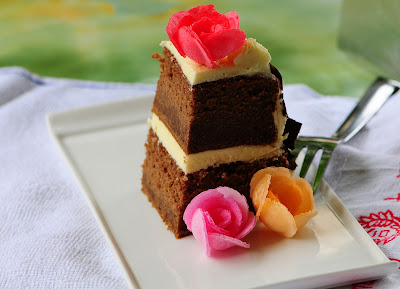 To make it more nostalgic, I placed a slice of the cake over the famed "Good Morning" hand towel. I believe these towels are still being used as hand towels in some homes and in some beauty salons. They are cheap and absorbent. They bring back memories - I am sure - for the initiated. 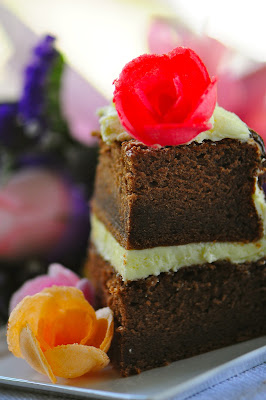 Although I was pleased with the cake (it tasted better the next day), I think I should have used only one heart-shaped pan instead of two for layering. The cake was rather high but the taste made up for it. So Happy Belated VD, everyone!