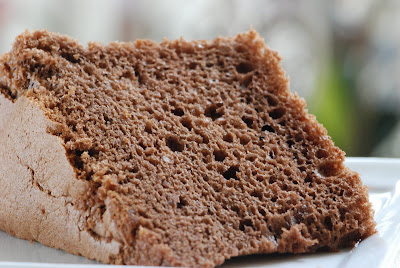 Tried my hands on baking a Chocolate Chiffon after attending a recent baking class. So far, I have attempted Orange and Milo Chiffon (recipe for the latter was taken from one of the bloggers). Pretty pleased with this chocolate version as compared to the other two.
The actual recipe calls for a Chocolate Chip Chiffon but clearly from my post, it is a chiffon minus the chips. Well, I had my sister in-law visiting me on that day and at the exact time when I was about to make the cake. She has earned the title of Chiffon Queen. But she has stopped baking for a very long time and I inherited her chiffon cake tins. So I was nervous with her in the kitchen and it showed when I forgot to add sugar to the mixture of flour, egg yolks, oil etc. I did not realize it till I licked at the spatula before washing it (there you go - my confession) and it tasted really bland. Aha! No sugar and I spotted the tiny bag at the corner of the table. I added the sugar and quickly gave it a mix as I was worried I would have over mixed batter. Her presence could still be felt although she left the kitchen for the dining room. 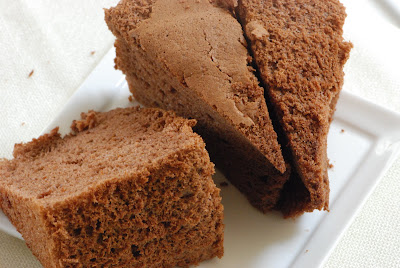 After folding in the egg white mixture (this time I remembered the sugar and cream of tatar), I immediately poured the batter into the tin and popped it into the oven. Very satisfied with the whole delicious brown batter. As I was clearing up the table, there on the table was the packet of weighed chocolate chips. Sigh. But hey, I always wanted to bake a plain, simple chocolate chiffon. The chips could wait.
The Chiffon turned out fluffy and just like what it should be. For a non-expert baker like me, it is an achievement. 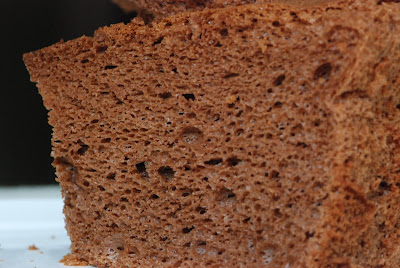 I have only sliced pieces for my photo shoot as the whole cake was cut and distributed almost immediately when it cooled. There was no waiting, at least on my part, as I had wanted to try to see if it is really as good as it looks.
Well, I guess I will attempt one more time and this time the chips will be in, folded and baked.
I am unable to produce the recipe as it was copyrighted by the trainer. However, for those aspiring Chiffon bakers, you could refer to my June 21 2011 post on Milo Chiffon taken from allthatmatters. blog. Her recipes are simply fabulous too.
Posted by ken bakes at 6:15 PM

Email ThisBlogThis!Share to TwitterShare to FacebookShare to Pinterest
Labels: Chiffon